The time I asked Alonso about the Indy 500 on Twitter… 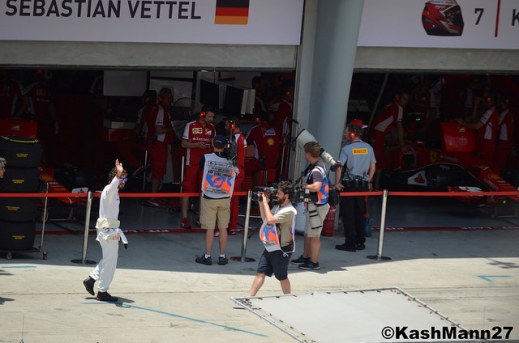 Something weird just happened yesterday. Or actually the last two days or so. Let’s start the story on good ol’ Twitter.

I happened to see a friend of mine posting a question to two-time Formula One world champion Fernando Alonso and I noticed he was going to do a Twitter Q&A bit, #askAlo, so I thought, hey why not? I should ask him something too being a big fan of the guy myself. But what? At that point, I was watching a video from another friend of mine who attended the 2015 IndyCar MAVTV 500 in Fontana (that was a brilliant race), and it hit me!

I had heard from the likes of Will Buxton from NBC asking Alonso and another F1 world champion Sebastian Vettel about possibly giving the Indianapolis 500 a try sometime in the future. Since I’m in Singapore, I can’t see their videos on the NBC Sports thing so I won’t know what was said. So might as well ask the man himself about one day racing at the Indy 500. We already know he wants to try the 24 hours of Le Mans (and he almost did race for Porsche this year), which 1/3 of the triple crown of motoracing (The 24 hours of Le Mans, the Monaco Grand Prix and the Indianapolis 500), so what about the Indy 500?

Now, I didn’t expect him to answer or if he’ll even read it so I just went on with things, not thinking much about it. I mean, he’s probably talked about it with the NBC guys so who knows? Guess what, Alonso did reply back!

Ok, I don’t know if that counts as a reply as he quoted my tweet. And here’s the funny part, I still don’t know how to do that! So this two time F1 world champion seems to be open to the idea of racing in the Indy 500 sometime in the near future, how about that? As he says, “it’s attractive for any racing driver” and ask anyone else, I’m sure they’ll say the same thing. Things got a bit more weird with that particular sentence later on. I guess we can start to imagine the likes of one of the best racers in the world, Fernando Alonso in an IndyCar around IMS. That would be pretty cool. It would be nice if it did happen in the future!

Now with him replying to me, obviously I’ll get quite a bit of notifications on Twitter. I thought I’d have some fun and share that pic of Facebook just to let everyone know that Alonso might think about giving Indy 500 a try and that this bugger here asked him that question haha! As a friend of mine said, “how did you like your 15 minutes of fame?”. Obviously it wasn’t but hey, still a cool moment when someone you’re a fan of mentions you. Now things get a bit crazy.

I wake up the next day, and the first thing I see on Facebook was a post from IndyCar, talking about Alonso and Vettel possibly giving the Indy 500 a try. I’m thinking to myself “what are the odds that happen to see his tweet to my question on that”. Surely not. Then I get a notification on Facebook, a friend telling me to read that article.

Right at the end, I see that quote of Alonso’s and I see my name on it too. Holy crap, my name is on an article on the IndyCar webpage! Ok, it was actually my Twitter username but still, that’s me! And me being a huge fan of IndyCar, I’m going nuts about it! And then I find out ESPN has got an article about it too!

Already the first sentence caught my eye. “Attractive for any driver”, where have I heard that from? Yup, this also mentioned that answer from Alonso and this time, along with two others. The bit where he spoke about Kimi Raikkonen was bloody good, my favourite bit from his whole Q&A bit. He did own Raikkonen after all and he owned him with that answer too haha.

It’s really weird to see my name on a Motorsports article on ESPN, IndyCar and also apparently a few Dutch sites too. I did say once that being a sports journalist would be a cool thing for someone like me, I’ve always wanted to travel around and watch these races (F1, IndyCar, Formula E, NASCAR or whatever) and maybe write on stuff about it or take photos from these races. I do like taking photos of these race cars, check out my Flickr page for pictures I’ve taken from all the races I’ve been to (https://www.flickr.com/photos/kashwinner/albums). Maybe I should have done that after all and who knows, maybe my name could appear on ESPN and IndyCar a bit more often haha! I can dream right? But hey, we might not have to dream about the likes of Alonso and Vettel in an IndyCar, that might actually happen sometime soon! How awesome would that be!

Enough of me and my 2 seconds of fame and seeing my name of motorsports article, even if it was a cool moment, how would those guys do in a race like the Indy 500? We’ve already see Nico Hulkenberg have a go at the Le Mans 24 hours and not just complete the whole race, he actually won the damn thing and he was the one driving the car to the finish line. Those LMP1 cars are probably more similar to the F1 cars so it wouldn’t be much of a change but the IndyCars, especially the oval configurations, that’s something different and might take these guys a while to get it. I mean, Juan Pablo Montoya did struggle for the first half of last season when he came back to IndyCar, look how he’s doing now. He’s leading the damn championship with a second Indy 500 win to his name!

I actually think Alonso and Vettel could fare quite well in an IndyCar. Let’s not forget the story of good ol’ Nigel Mansell. He won the F1 world championship in 1992 with Williams and brought his talents and his mustache over to America in 1993, joining the then CART series and won the 1993 CART IndyCar championship as well! He could have, and probably should have, won the Indy 500 at his first attempt if not for a bad re-start. Ok, Alonso and Vettel will probably stay in F1 and won’t get much running time on an oval for an IndyCar if they decide to go for it (and if the calendar allows them to do it) but who knows, those two are two of the very best in the world, so I’m sure they’ll cope with it fine after a few runs. Would be nice if either one of them gave it a try next year for the 100th Indianapolis 500.

And to end this bit, here’s one pic from this past March from the Malaysian Grand Prix of the man himself, Fernando Alonso, in his McLaren Honda car. If only that car was any good…

Sometimes quiet, sometimes talkative, you might not hear much from me, but if I feel the need to speak, you will hear about it. My opinions are that of my own…so it’s not always the right view then haha! Now 25 years young and still stuck in the little island country known as Singapore. Anything that is motoracing, wrestling or soccer related, and you can expect to hear from me about it. If not, then well anything goes! Well…almost anything.
View all posts by KashMann27 »
« Previous post
Next post »