So yeah I’m bored. Can’t be arsed to continue with my revision at the moment so I might as well just have fun with this.

I had this fun little idea about the greatest WWE advertisement/promotion that has never happened. Think about it, we have New Day’s Booty O’s (real cereal) but you’ll need a drink for it too. Not just any drink and it’s also not just any gift. It’s the Gift of Jericho. DRINK IT IN MAAANNN.

It’ll start out with New Day talking about some nonsense random stuff (as they usually do, but it’s always funny), Chris Jericho comes in to interrupt them and of course calls them stupid idiots. They argue a bit and Jericho tells them to watch “it”. (Yes, he’s made a two worded letter a thing now, he’s that good). What is it? It….is the Gift of Jericho. DRINK IT MAAANNNNN. Yes I said it again. Just drink it in. 😛

They argue about who has the best WWE merch right now, Booty O’s or the Gift of Jericho but then someone interrupts and HIS NAME IS JOHN CENA! Of course he thinks he’s got the best merch, his own stuff. (How do we know, we can’t see him anyways). New Day and Jericho aren’t happy about Cena interrupting them but then comes The Club (AJ Styles, Luke Gallows and Karl Anderson) and they tell the rest not to worry, because they’re going to do their favourite thing in the world. Eat some Booty O’s maybe, drink in the Gift of Jericho and then….BEAT UP JOHN CENA.

And that starts a fight between everyone! Well it’s close to January so it’s the Royal Rumble season! And for the ending part we’ll see DIY (Johnny Gargano and Tommaso Ciampa) sneak up from behind to try both stuff from early on. They liked it so much that they start to hear that familar song…and it’s Bobby Roode behind them. And yes, there is an impromptu Glorious Bomb from those three to end that skit. Not a bad way to use their best stuff from 2016 eh?

Yup I’m just really bored and got this idea from talking to my brother  number of months ago during one of our usual WWE improve nonsense bits because come on, who doesn’t like imitating these guys anyways? 😀

Back into Pokemon TCG: Evolutions Pre-Release 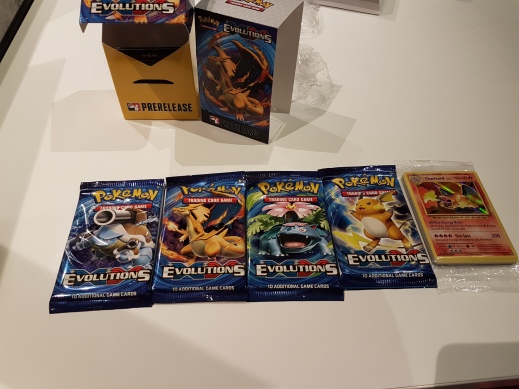 I’ve been meaning to post this for some while but I kept forgetting to do so. But anyway here it is! This happened near the end of October so I’m a month late with this.

I used to be a huge fan of Pokemon Trading Card Game. I would play and collect the cards back in the day when it first showed up in 1999 up to around 2006-2007 when most people here stopped playing it for some so I followed suit too. I’ve always liked playing TCG games, the main two for me being Pokemon and WWE’s RAW Deal.

After a long while, my brother finally got me back into playing Pokemon TCG a few months ago. I forgot how much fun it was to collect those cards, opening those boosters and hoping to get a rare card and just playing the game itself. It sure helped that Pokemon TCGO was a thing too, playing the online version of the game on my laptop sure helped with my “addiction” of Pokemon TCG. In fact that might be the game I’ve played the most since August.

So now I’m fully back into Pokemon TCG and looking for anyway to join in the fun and have matches here around Singapore and the first one I found was the pre-release tournament for the latest Pokemon TCG set, Evolutions. One of the main reasons why I wanted to try it was just to see the old base set cards being re-printed in the newest set with the updated stats.

I think I was the 3rd person to sign up to it so you can tell how keen I was to give this a try. After all I never got to play against other players in TCG too so why not? The way the pre-release works is that we get a box containing 1 promo card (either Gyarados, Charizard, Machamp or Mewtwo), 22 aditional cards and 4 booster packs of Evolutions to help us build our decks.

Once we got the signal we had to build a 40-card deck from the cards we got inside our pre-release box and the energy cards provided by the organizers. I was hoping to get the Charizard card and luckily for me I did! It was the one most wanted to get out of their pre-release set at the Battle Bunker, which I now know is a great place to play card games.

I ended up making a fire and psychic deck because of the 22 cards I got from the set. I did pull some good cards from the 4 Evolutions boosters, including Pidgeot EX, a holo Cleafairy and two Brock’s Grit. I didn’t put Charizard in my deck as I only had the 1 Charmander and 1 Charmeleon so I couldn’t risk them. Here’s my deck for my pre-release tourney: 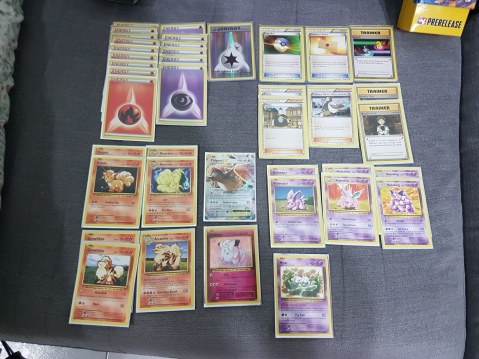 Not the greatest of decks but still something I could work with. My main attackers would be Nidoking and Pidegot EX, with Arcanine and Mew as the back-ups. It was my first pre-release tourney or any kind of tournament for a Pokemon game of any kind, I was just excited to be a part of it! The way it went was that we’d play 4 matches, and the people with similar records would play against each other.

My first match was also my first “win”. I say that because my opponent never showed up! I was one of the lucky 4 or 6 who got a bye in their first match so I decided to have a friendly match against the guy I was sitting next to during our deck buildings while we waited for Round 2. I was a close match, I did some damage with Arcanine but I got beat by Arcanine too.

The second match was the worst, it was over after 2 turns! I only had Clefairy to go with and since it had just the 40 HP, that wasn’t helpful. It didn’t help to go up against Mewtwo. I made the mistake of trying to put him to sleep with one energy and that meant Mewtwo’s psychic move now would hit me for 40 damage, one hit KO! 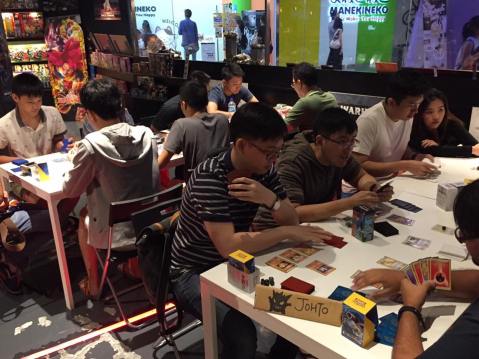 The third match went a bit longer but again I got beat by not having a good hand. The fourth and final match was the closest I got to winning. Nidoking was doing early damage for me and I was 1 prize away from winning. I read Pidgeot EX’s Mirror Move wronly and that ended up costing me the win. And yes, I got beat by Nidoking! Not again. Oh well.

So I ended the pre-release tourney with a 1-3 record but realistically, it was a 0-4 record so in my head, I’ve not gotten a competitive win in a Pokemon TCG match so far. I will try to change that sometime soon as I plan on giving a Pokemon Draft Night a try, a format somewhat similar to the pre-release and the shop is near my place so why not?

It turns out that everyone who participated in the pre-release would end up getting 3 additional Evolution booster pack. I got some good pulls out of that too, holo Hitmonchan and Charizard EX! Two EXes in my first 7 Evolutions boosters! Unfortunately, it has stayed that way, the next 14 Evolutions booster’s I’ve opened so far only has gotten me 2 Holo cards (Gyarados and Poliwrath). No luck for me in Evolutions yet but I still like it so much! Those retro cards all look awesome! I want more!

I really did enjoy that pre-release tourney. It was so much fun even though I lost all my matches. It was great to meet and talk to many other players who all had the same interest about Pokemon TCG or just Pokemon in general. Those guys were also helpful on giving tips to build a good deck, what cards I should add to my decks and what other stuff to get. Hopefully this is just the start of something more. I’m just glad I got a nice reminder of how awesome Pokemon Trading Card Game and the Pokemon TCG community really is.