So last weekend was a historic race huh? For the first time in the long Formula One history, we had a wet race at night! So that was a pretty cool experience to be in the first one ever. Oh and the Ferraris before retiring on Lap 1 for the first time ever too which really made my weekend haha.

So after my bad experience of sitting in a grandstand in Singapore 2 years ago and saying I probably won’t ever get another grandstand sit here again….yup I bought one. I couldn’t help it and I just had to give it a try so this time I went for the Esplanade Bayfront grandstand, I thought it might be a good spot to check out. Turned out to be a really good spot so I’m glad I did get seats there.

For once, I didn’t really do much in the lead up to the racing weekend. It didn’t help not hearing about any driver’s public events or appearances anywhere! They must have been all private events this year so that really sucked. You want to bring the sport closer to the fans but you keep blocking them off with little events and the only way to go to their autograph session is by winning tickets for it. Not cool. They really need to look at the way Australia does it.

I was really looking forward to watching the cars in action this year. Unlike some others, I actually do like how the cars look this year. And there were some good looking cars this year. Toro Rosso, Force India, McLaren, Sauber and Renault all have great liveries on their cars for the 2017 season. Quite rare to have that many good ones on the same grid.

So for Friday I started the day out at Turns 11/12. Since I was stuck in zone 4 for this year, that was the first place I had in mind to check out. After all, there aren’t many good spots in zone 4 so I might as well spend most of my time at the better spots. At any point you could be seeing the cars from the side view, the back view or the front view around that Turns 11-12 area. Good spot for taking pictures of the cars too. So much so I spent the entire FP1 at the Turns 10-12 area.

If you’re ever at the Singapore Grand Prix and all you’ve got is a zone 4 ticket, the really good spots are at Turn 8, 11/12 and 14. I even tried to see the action at the turn 13 hairpin but you had to stand on a railing just to see the cars. The bit before Turn 14 is also another good spot, that’s the place where you’ll hear the cars at their “loudest” and also the easiest place to see sparks flying off these cars which is always a nice visual. Too bad I can never get a good picture for it. It’s usually the one spot where I’ll be taking videos instead of pictures. You can actually hear the differences from each power units in action.

There is an interesting spot on top of the Esplande building overlooking Turn 15, you can see the cars from the view of the 4th floor and since the building is inside the circuit, anyone with a ticket can watch it from there. It’s also one of the few spots around the track where you can get a picture of these cars without those catch fences being in the way but only for one specific spot. I liked it so much I almost spent all of FP3 at that spot. I probably should have as I didn’t get one good picture of the cars from Turn 15 when I decided to switch with 20 minutes to go.

The atmosphere was amazing with fans from everywhere coming down to Singapore. There were people from Netherlands (lots of Dutch fans here), Denmark, Mexico, Canada and even good ol’ USA but the main ones are the Brits and the Aussies. I ended up sitting around some of them during the race and of course they had a friendly banter with one another with Hamilton and Ricciardo fighting for the win.
There’s no clear cut favourites on who the fans all support so it’s nice to see all different supporters, as it tends to be the case around here. You’ll always hear a cheer for either the Ferrari guys, Mercedes guys, Red Bull guys or the McLaren guys (McLaren fan here). Oh if you were wondering, there was a loud cheer when the two Ferraris crashed into each other during the race. Guess my area was the anti-Ferrari zone.

The same can be said during qualifying. I went back to Turn 11 because there was a super screen there and I wanted to see what times everyone was doing. The crowd around me for qualifying were pro-Verstappen. I was a bit surprised to see a lot of Dutch fans here in Singapore, they really do travel around to support their guys. Good on them. I was sure a Red Bull car would be on pole position with how quick they were in all three practice session but of course Sebastian Vettel had to ruin that and take pole away. Laugh it up Ferrari fans, guess who got the last laugh? 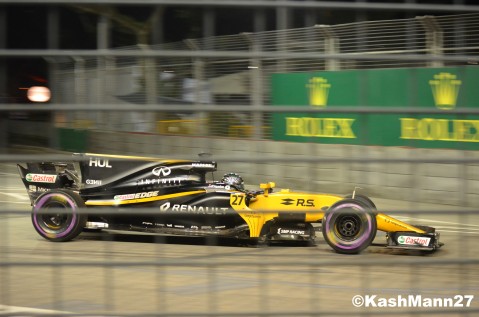 For once I didn’t really bother with the music concerts. I mean look who was there. One Republic? Don’t know them. Chainsmokers? Never heard of them. Calvin Harris? Who the heck is he? I honestly have not heard of him until the friday of the racing weekend. Turns out his is dance music. Really, you’re going to have that shit at an F1 circuit? Where’s our rock & roll music? I mean think about it, F1 is an adrenaline pumping sport, rock and roll gives you that adrenaline rush too! I mean it’s perfect for an F1 race and it’s my kind of music. So until we get someone good, I won’t bother with these concerts. Then again, I’m here at an F1 circuit for the racing itself. I guess you can see why the Australian Grand Prix is still my favourite race to visit, it’s all racing there.

So Sunday was fun in some ways. Looking up in the sky, I knew this could be the day we actually do get hit by the rain during the racing weekend. For some weird reason, the only time it has rained was two Fridays and it was well before any of the F1 practice sessions started. The weather really didn’t help that day. It was raining, then it stopped, then it rained again, then it stopped again, it went on and on. Especially around 10 minutes before the race started, the rain came down again. It wasn’t fun hiding under the grandstand to avoid the rain and still get hit by it! Oh and a piece of advice here, always bring a poncho! I forgot to bring mine and I had to buy one (just for $2) because they didn’t allow umbrellas to be used in the grandstands. I should have known better from my experiences in Suzuka and Melbourne.

So the rain actually rejuvenated the fans around my area, we were all psyched and ready to see the start of the race. We all kinda knew we were about to witness history, the first ever wet race at night in F1. And these guys have never raced around the track in the wet session too so it was a step into the unknown for everyone involved.

And then the start happened. So if you didn’t see, how did you not? Vettel started on pole, Verstappen 2nd and Raikkonen 3rd. Kimi gets a better start then the front two, Seb gets a slower start, tries to cut off Max and this caused Kimi to hit Max and then his own team-mate! The Ferrari guys took each other out! HAHAHAHAHAHA! I’ve never had a good laught at a race like that. People who know me knows how much I hate Ferrari so this felt like my birthday, the greatest gift of them all seeing those two cars out in the first lap!

It was weird seeing the cars race while shivering in my poncho. This was actually my first wet race! I’ve seen wet practice or qualifying sessions in Melbourne, Suzuka and Sepang but never the race itself. Of course I had a tall bloke sitting in front of me in a grandstand as per usual but this time he didn’t really block my view that much when trying to take a picture of the F1 cars in actions. 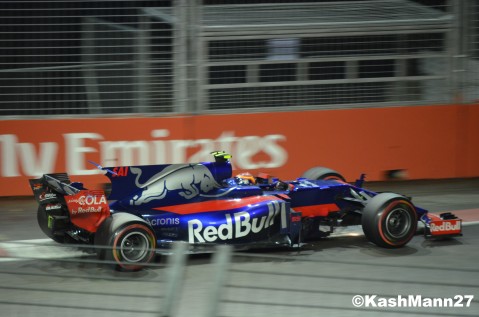 In the end it was Lewis Hamilton picking up an unlikely win in Singapore. I wasn’t expecting to see a Mercedes car on the podium this weekend since Singapore is their weakest track so to see both of them on the podium was something else. Good ol’ Daniel Ricciardo was on the podium for the fourth year in a row but still not the win. One day Dan will get it and I hope I’ll be near the podium to see it happen. Special shout out to Carlos Sainz, Jolyon Palmer and Stoffel Vandoorne, all 3 of them got their best career finishes in that race with 4th, 6th and 7th respectively.

So it was another good weekend at the Marina Bay street circuit. I already know which tickets I’m aiming to get for next year’s race. Yes, there will be a next year after the news broke that Singapore has re-signed the race for another 4 more years among all the other breaking news to come out last weekend (McLaren switching to Renault power, Toro Rosso switching to Honda power and Carlos Sainz moving to Renault as part of the whole deal). Always good to have my fix of racing in for the year and hey, it won’t be the last, I’ll be at Sepang for the final Malaysian Grand Prix. I hope it doesn’t rain there too.